Welcome to Seattle Dream Living, a website devoted to elegant lifestyles, vintage, modern or luxury homes, gracious living all in Seattle and the Pacific Northwest. Please allow me to assist in all your real estate needs. My direct line is 206-329-3795 or email me at Marlow@SeattleDreamHomes.com 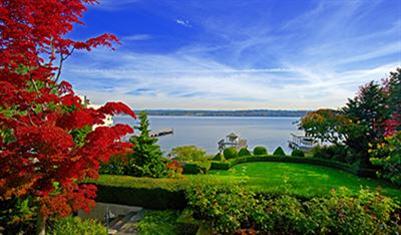 For being such a rainy place, gardening is a very popular pastime in the Seattle, Bellevue and Redmond area.  We're in Zone 7 so we have a moderate climate and a surprisingly large number of plants are grown here, even including palm trees!Kubota Gardens

Evil spirits can only travel in a straight line so Fujitaro Kubota staggered his bridge to impede the spirits' path. That's just one of many fascinating discoveries at Seattle's Kubota Gardens. The gardens blend traditional Asian accents with the vast array of Seattle's plant life, yet the effect is far from conventional. The garden conveys Fujitaro's flamboyant individualism tempered by the natural landscape. Fujitaro came to Seattle in the early 1900s and landscaped properties throughout the area.Washington Park Arboretum

When lumber baron Prentice Bloedel began his garden in the 1950s, he wanted it to be a place that captured the mystery and magic of nature. But decades later, the caretakers at the 150-acre reserve weren't above giving nature a hand. One of the spectacular sights at Bloedel Reserve is the moss garden. Caretakers purchased several thousand sections of Irish moss, then cut them into one-inch squares for a total of 275,000 square inches of moss. Once planted, the Irish moss encouraged native mosses to grow in the area and now they all provide a lush carpet of greenery.

Meerkerk Rhododendron Gardens, a not-for-profit garden open to the public, encompasses ten acres of display and educational gardens enveloped by forty-three acres of woodland preserve with 4-5 miles of nature trails. Friends of Meerkerk memberships, plant sales, admission donations and contributions combine to care for the Gardens. We hope you enjoy your visit and visit often.

The roots of the Carl English gardens are military but this historic collection is far from regimented. Carl English, Jr. began cultivating the garden in the 1930s when the Army Corps of Engineers brought him to the Chittendon Locks area of Seattle. He collected seeds from around the world and the caretakers there today are committed to preserving each of the 500 species of plants on display.

Not only are there beautiful gardens here, the activities of the locks are a great pastime to watch on a sunny Summer afternoon.  And, if you're lucky, the bridge will come down and a train will pass over head.

The author of the saying "Great fences make great neighbors" obviously didn't have Sunni Rudd and Sharon Stevens in mind. These two south Seattle residents don't believe in barriers, and to highlight their convictions they call their joint garden Strudd Park--it's a combination of their last names. A tour of the garden includes a stroll past Shar's calla lilies and peonies, and ends with an imaginative flowerbed that Sunni created from--what else--a bed!

Call Marlow Harris for all your real estate needs

Marlow is a Seattle native with over 10 years of experience in Seattle real estate sales and service. Call today - Marlow's direct line is 206-329-3795 or email at Marlow@SeattleDreamHomes.com

Please call Marlow at 206-329-3795 or email me at Marlow@SeattleDreamHomes.com

Roots of Style: Do You Live in a Minimalist Traditional House?
Kitchen designs, bathroom designs, and more ∨ Browse bedroom ideas, from loft beds to a decorative duvet cover, and dream in style. Work with a home decorator when choosing area rug designs or hanging a new window blind in your home.

Forage for your own food in the Pacific Northwest!

Search for all Seattle Homes for Sale

Roots of Style: Do You Live in a Minimalist Traditional House?
Kitchen designs, bathroom designs, and more ∨

Browse bedroom ideas, from loft beds to a decorative duvet cover, and dream in style.
Work with a home decorator when choosing area rug designs or hanging a new window blind in your home.